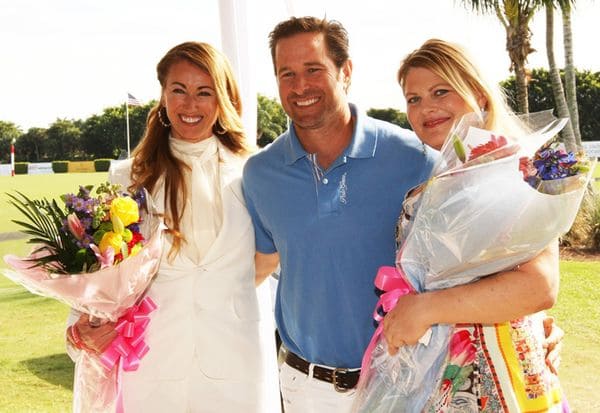 We are happy to support this wonderful event to benefit the Leukemia and Lymphoma Society on January 18th, 2016 at  The International Polo Club, Wellington, FL. Read Article below:

For years Brandon Phillips didn’t want to talk about it.

The Toronto native and Wellington professional polo player had a tough time even acknowledging that he was diagnosed with life-threatening non-Hodgkin’s lymphoma in his teens.

Polo for a Purpose co-chairs P.J. Rizvi (left) and Visse Wedell (right) with professional polo player Brandon Phillips at this year’s event which raised $250,000. Phillips, a cancer survivor, is helping to coordinate the event that will mark its third year on Jan. 18.

But in the past few years, Phillips, 37, has taken a more active role in fundraising and awareness, working with the local chapter of the Leukemia and Lymphoma Society. The team of Phillips, the society and co-chairs PJ Rizvi, Visse Wedell and Penny Bradley, is gearing up for its third annual Polo for a Purpose fundraiser — an event that raised more than $60,000 in its first year and more than $250,000 in its second. The event is set for Jan. 18.

Phillips said he can really connect with kids who have cancer because he went through the same things.

“I was in the same boat you were,” he can tell them. “You fight through it, and there’s life after.”

For Phillips, it all happened suddenly.

One night he went to sleep after playing in a soccer game, and the next morning he woke up with a swollen leg that would be diagnosed as a golf ball-sized tumor.

The doctors said there was a 50/50 chance that Phillips would even survive, but after chemotherapy treatment, he was back in school within months. By age 17, Phillips had become a professional polo player, and he hasn’t looked back.

Getting through cancer can be a struggle, but it’s important for the survivor to keep his or her spirits up. Phillips said he knew he had to stay strong to survive.

When kids see him on the polo field, they can use that as an example of what life can be like after they beat cancer. Phillips will take the field during Polo for a Purpose with other professional players in an all-star game, of sorts.

For $10 a person or $25 per carload locals can watch the quick-paced, exciting sport. All proceeds go directly to the Leukemia and Lymphoma Society.

Having locals like Phillips and the co-chairs helping to organize fundraisers, makes Executive Director Pamela Payne’s job that much easier.

Payne has been blown away by the involvement of the planners and the response of the community. It’s not often that people will come to her with ideas that immediately become wildly successful.

“It’s like a dream come true,” she said. “You can sit here and think about events all day and all night, but when you’ve got people of this caliber leading that charge, it’s phenomenal.”

The event will also feature fun activities for the children like bounce houses and face painting. Phillips hopes it’s able to eclipse the $300,000 mark this year.

To learn more about the event, donate or buy tickets, visit poloforapurpose.org.