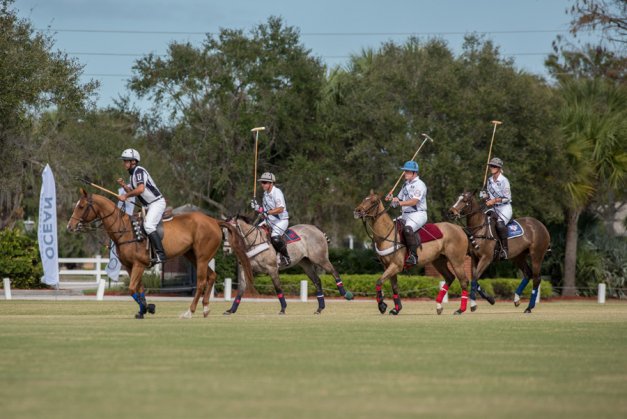 Article by: BY TERRY CONWAY

All the pretty ponies have returned. Tacked up, legs wrapped, they thunder down the emerald field, their riders smacking a small white ball with cane mallets — thwack!

Polo season is in full swing.

Now in its third season, BG Vero Beach Polo Club’s weekly professional-level match games continue through April 30. Matches are played at the Polo Grounds, the equestrian community that was once home to the Vero Beach Polo Club. The camaraderie of the game is a big part of what makes it so enjoyable, attracting area polo families as well as crowds of curious spectators arriving with lavish picnic baskets and bottles of champagne to enjoy the thrill of “the fastest game on four feet.”

Locals will recognize the star of the field as Vero Beach native and graduate of Saint Edward’s School Tiffany Busch. Busch, a member of the Anheuser-Busch family, grew up riding at the family’s ranch in Montana. Today, she is recognized as one of the top women players in the world and is rated as a 2-goal handicap. Busch brings a fiercely competitive spirit to every match. At the 2013 Women’s Championship Tournament in Houston, she scored the overtime goal that earned Busch the title of Most Valuable Player.